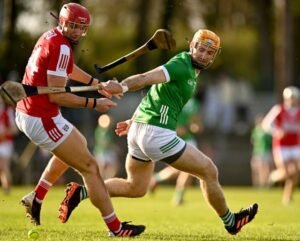 LIMERICK’S senior hurlers have opened their 2023 campaign with a 0-20 to 1-16 defeat to Cork in their Munster Hurling League clash at Pairc Ui Rinn.

John Kiely’s men led heading into added time but two late points for Cork sees them into the final. Limerick were one down at half-time but led by four at one stage in the second half. Their tally of 16 wides cost them dearly.

Conor Lehane and David Reidy landed a free each that saw the game level after six minutes. Another Lehane placed ball and scores from play by Brian O’Sullivan and Conor Cahalane had Cork 0-4 to 0-1 in front.

Limerick responded with a Shane O’Brien point and then Darragh O’Donovan’s long delivery into the full forward line went towards Oisin O’Reilly but the Kilmallock man didn’t get a touch and the ball went all the way to the net.

Cormac Beausang soon had the game all square for a second time and then two fine effort from Brian Hayes and Lehane saw Cork go in front by two after 20 minutes.

The Rebels further increased their advantage with a Luke Meade point, before Aidan O’Connor and O’Brien saw Limerick bring the deficit back to a point. Reidy’s second free of the game then levelled it at 1-5 to 0-8 with 29 minutes played.

Beausang and Lehane soon had Cork two clear once more but O’Connor and a Reidy free saw the game level for a fourth time in the lead up to half time. Lehane then put Cork 0-11 to 1-7 in front at the break with his fifth of the half.

Reidy and Lehane were to the fore in the early stages of the second half with the the Limerick man winning the battle of placed balls by four to two.

Oisin O’Reilly then got in on the act from play to put Limerick 1-12 to 0-13 ahead with 44 minutes played. Reidy and Barry Murphy then made it a four-point advantage.

Led by Lehane, Cork managed to square the game up for an eighth time with five on the clock but Conor O’Grady had Limerick ahead going into added time.

Lehane’s 12th of the afternoon squared the game up once again and Hayes fired over the winning point deep into added time to see Cork to victory.