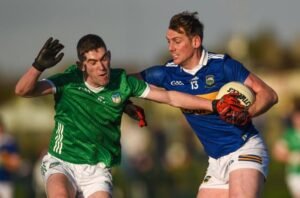 “GREAT to get to a final. The lads showed real heart to come back right at the end and get the result”.

Manager Ray Dempsey’s second game at the helm of the Limerick football team saw them advance to the McGrath Cup decider as a last gasp point seven minutes into added time gave them the 1-13 to 2-10 draw needed to get the better of Tipperary on score difference in the cold and hail of Fethard on Saturday.

Limerick will now face either Cork or Clare in the McGrath Cup final on Wednesday night, 7pm.

If fact, just minutes earlier in this cliffhanger clash, the hosts looked to have grabbed an unlikely victory when an all-out attack squeezed a messy goal to put them into the lead for just the second time over the hour.

Had their opponents held on, Limerick would have been left rueing a late turnover just as they were winding down the clock on a two-point advantage and looking like they’d finally sucked the life out of the Tipp challenge in a game where they looked the more composed and more purposeful throughout and always capable of finding the response when it was put up to them.

An early goal allowed them to dictate the play, defending in depth and hitting on the break whenever Tipperary drew level with them. Much of this confidence in what they could achieve was built around another commanding display by Cian Sheehan as he drifted between midfield and the half-forward line to orchestrate all that was happening around him.

Nine scores from play against their opponents’ five also showed the Limerick’s greater sharpness in front of the posts.

Although Tipp had more of the early play, Davy Lyons broke a run of missed chances at both ends to get the scoreboard turning over and, despite Séan O’Connor levelling off a free, Limerick’s tighter defence and speedier attacks led to Cian Sheehan and Adrian Enright restoring their lead.

Once the hosts tightened up their delivery to their front men, they began drawing the fouls but, after Conor Sweeney punished one of them, Limerick broke from the kickout and Gordon Brown ran onto Sheehan’s delivery, jinked past the challenge and drilled to the net.

Another Sweeny free and O’Connor’s free pulled the gap back to two but Donal O’Sullivan twice came up from the Limerick net to reply off frees but Tipp picked up a gear coming up to half-time as Teddy Doyle shot over their first from play, O’Connor sent over a free and, winning the resulting kickout, he was on hand to run onto the return and blast past O’Sullivan. However, Lyons claimed a mark off the half’s final attack to level the scores at 1-6 apiece.

Right on the restart, Liam McGrath put the Premier men ahead only to be immediately met by Brown and the sides were level again after Sheehan and Sweeney swapped frees. With the wind picking up, Tipp missed a few chances as they fell behind to strikes from Enright and Sheehan but they rediscovered their groove as O’Sullivan had to stretch his feet fully to deflect McGrath’s low shot over the crossbar and Sweeney followed up with a free.

Just as a hail shower sliced across the field, Nash and O’Sullivan’s free put Limerick two ahead and started holding possession as the stopwatch stepped into added time. However, a turnover allowed Tipp to chase the goal they needed and, after a protracted attack against a dogged defence, sub Joseph Lawrence shot through a forest of legs to rap home what looked like an unlikely winner.

But the raft of subs and stoppages left another another few minutes for Limerick to find a reply and, with the last move of the game Fahy collected, turned, jinked and shot Limerick into the scoreline they wanted.