There is deep sadness in Limerick GAA circles this week following the sudden passing of U20 football selector Sean Holmes.

Sean, who died on Wednesday, was part of this year’s county U20 management team that led Limerick to victory over Tipperary before losing to eventual winners Kerry in the Munster semi-final. He previously served as a county minor football selector and won a Limerick SFC medal during his playing days with his native Oola in 1979.

He is survived by his wife Patricia and sons John and Alan and extended family.

Seanie was a proud Oola & Limerick man when Limerick beat Tipperary in the Munster quarter final in Thurles last year. Pictured on the night with Oola players Dubhan O’Grady and Jack Downey. Sympathies to the Holmes family. RIP Seanie@LmkFootballers 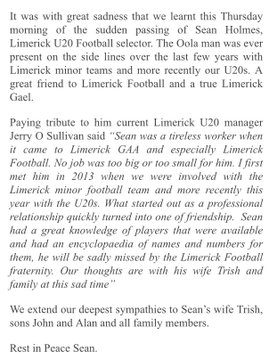 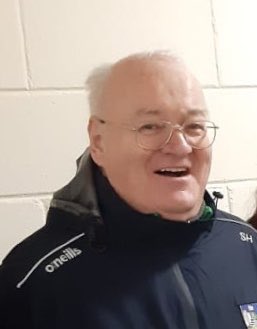 Today we lost one of our Football family in Limerick. Sean Holmes was a lovely man who worked tirelessly & was fully committed to helping Limerick football move forward. A great character.
I offer my sincere condolences to his wife Trish, his 2 sons, extended family & friend