RTÉ unveil contenders for Young Sportsperson and Manager of the Year – who should win?

Five rising stars have been shortlisted for the award along with six top managers. 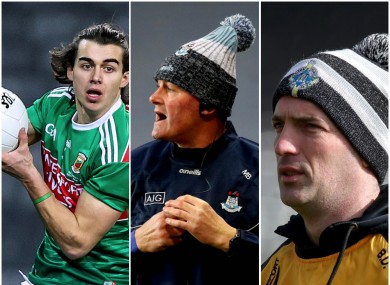 There’s plenty of talented sportspeople up for awards this year.
Image: Inpho/Photojoiner

RTÉ HAVE UNVEILED the list of contenders who have been nominated for the Young Sportsperson of the Year, and Manager of the Year for 2020.

Snooker player Aaron Hill, who pulled off a sensational victory over six-time world champion Ronnie O’Sullivan at the European Masters, is among the nominees along with Kildare boxer Katelynn Phelan.

The Manager of the Year group also contains plenty of strong candidates for the honour.

Brian Dowling is included in the list after guiding Kilkenny to a senior All-Ireland camogie title in 2020, while Dublin ladies boss Mick Bohan is also in the mix after their four-in-a-row triumph last year.

Find out the winner on Thursday 28 January on @rteone

Manager of the Year Nominees