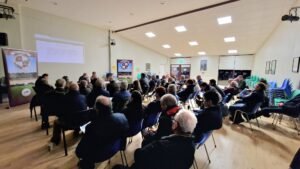 Athea GAA AGM:
Athea GAA AGM took place on Sunday evening last at Con Colbert Hall in front of a large crowd. Chairman Paul Curry welcomed everyone to the AGM and invited Secretary Pat O’Sullivan to read the 2022 secretary’s report. Pat gave a run down of notable events/achievements during the year, and thanked everyone for their support over his past five years as secretary. Following Pat’s report, Treasurer Mary Ellen Quille gave a run down of the state of our accounts for 2022. Much progress was made in 2022 to merge the various units of the club and to establish a fundraising committee. It was noted that our loan balance remains at approx €22,000, and a community effort will be required in 2023 to further reduce the balance of our loan. Paul was next to address the crowd present, welcoming especially the younger members of the club who took the time and interest to attend the AGM. The senior members of our club were also well represented, who were all in good and healthy form.
Chairman Paul Curry and Secretary Pat O Sullivan then stood down and the nomination of officers took place. John Kelly, who has worked with the Coiste na nOg for the past number of years was elected Secretary, Sarah Brouder was elected vice Treasurer and Ciara Hunt was elected Scór Officer. No nominations were received for Chairperson. It was agreed that the executive committee would work to elect a Chairperson at the next executive meeting. The remaining officers remained unchanged for 2023.
Paul and Pat were thanked for their time, effort and commitment over the past number of years. A presentation will be made to Pat and Paul at a later date, where their contribution will be rightly acknowledged. Thankfully, both men have agreed to remain on the committee as executive members to oversee the development of our car park and pitch drainage in the coming months.
A motion was also passed at the AGM to elect two vice presidents for life – Timmy Woulfe and Johnny Mullane in recognition of their contribution towards both Athea & Limerick GAA. Their achievements will be honoured at a date where they will enter the Athea GAA Hall of fame.
Finally, Thady Hunt presented a Silver Coursing Cup to the Club which dates back to the 1950’s. The Cup will be displayed at the Club House.

2023 Membership:
Membership for 2023 will open soon through Club Force. A 10% discount will be offered for the first few weeks. More details to follow next week.

Operation Transformation – Ireland Light’s Up:
We were delighted that our own Derek Byrne was profiled on Operation Transformation recently and that RTE came to our club to capture the enthusiasm of our walkers on Ireland Lights Up nights. Well done to Derek and to all who turned up on the night. The weekly walks continue on Thursday evening at 7pm.