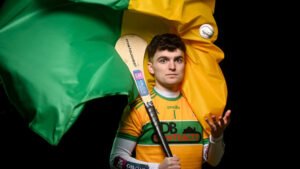 An epic season of action in the 2022/23 AIB GAA Club Championships will reach a fascinating conclusion this Sunday as the AIB GAA All-Ireland Football and Hurling Senior Club Championship Finals are played out at Croke Park.

The AIB GAA All-Ireland Club Championships feature some of #TheToughest players from communities all across Ireland. Now in its 32nd year supporting the GAA Club Championships, AIB is proud to once again celebrate the communities that play such a vital role in sustaining our national games. From players to coaches, volunteers to referees, to the passionate fans who will travel in their thousands to Croke Park this Sunday, AIB thanks all those whose work often goes unseen.

Representatives from each of the four clubs competing for silverware were present today to look forward to this weekend’s finals, with Joey Holden (Ballyhale Shamrocks), Ryan Elliot (Dunloy Cú Chullains), Connor Carville (Watty Graham’s Glen) and Shane Cunningham (Kilmacud Crokes) all in attendance.

Four-in-a-row Leinster champions, Ballyhale Shamrocks are no strangers to All-Ireland Final Day in Croke Park. The Kilkenny men avenged last year’s agonising final defeat to rivals Ballygunner in an enthralling semi-final rematch this year, with a TJ Reid major edging the tie on a scoreline of 1-16 to 0-16. Three points was also enough to get Pat Hoban’s charges over the line against Kilmacud Crokes to claim their 12th Leinster crown. The experience of veteran campaigner, Joey Holden has been a key part of the Shamrocks’ title tilt this season and will no doubt be needed come Sunday.

Eager to upset the odds are Dunloy Cú Chullains of Antrim who dispatched a much-fancied St. Thomas’ outfit in the semi-final, with a goal for the ages from Keelan Molloy fired the Ulstermen to a famous four-point win that day. This followed an equally impressive win in the provincial final win over Slaughtneil which secured Dunloy’s first Ulster title since 2010. Clean sheets from netminder Ryan Elliot have proved pivotal in both of these matches, and the county man knows that nothing but his best will do again this weekend.

Kilmacud Crokes will also be hoping to make amends for defeat in last year’s AIB GAA All-Ireland Football Senior Club Championship Final, where a last-minute goal from Kilcoo saw the South Dublin men leave GAA HQ empty handed. Robbie Brennan’s team have been men on a mission this year, with impressive victories in their provincial campaign over Naas (Kildare), Portarlington (Laois) and The Downs (Westmeath), before a resilient performance over Munster champions Kerins O’Rahillys. A vital cog in the Crokes’ machine is Shane Cunningham who will be expected to be front and centre as his team seek their first Andy Merrigan Cup since 2009.

Coming into the final on the crest of an already historic season are Watty Graham’s Glen, who became Ulster champions for the very first time when they disposed of the reigning All-Ireland title holders, Kilcoo in a memorable Ulster final. Captain, Connor Carville has led the defensive effort for Malachy O’Rourke’s men thus far, and he was to the fore in the nail-biting semi-final victory over Moycullen of Galway. Will the Men from Maghera lift the cup in their first ever All-Ireland Final appearance at Croke Park?

Looking ahead to this weekend’s finals, AIB Chief Executive, Colin Hunt said: “After another memorable AIB GAA Club Championship season, we are delighted to be back in Croke Park for the Senior Club Championship finals. While this weekend’s games will be watched nationwide, it is a special day for those involved with the four clubs competing on Sunday. And all will represent their communities with pride. On behalf of AIB, I would like to express our gratitude to each of you for playing such a central role in this year’s competitions. We wish you the very best of luck from the first whistle to the last.”

Uachtarán Chumann Lúthchleas Gael, Larry McCarthy stated: “We look forward to welcoming supporters to Croke Park this weekend for what is sure to be a thrilling conclusion to this year’s AIB GAA Senior Club Championships. We thank everybody for their steadfast support of teams throughout the season. I also take this opportunity to thank our long-term partners, AIB, for their continuous support of the Club Championships. With their support, these unique championships have grown year on year. Finally, to all four teams competing this weekend – I wish you the very best of luck.”