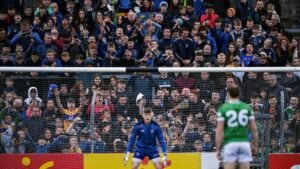 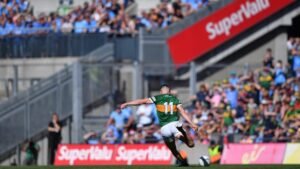 It was another action packed year of Gaelic Football in 2022 with plenty of memorable moments.

Here, in no particular order, are ten of the best.

Kerry versus Dublin generally means one thing: drama. That was most certainly the case in a frenetic and furious All-Ireland SFC Semi-Final at Croke Park. Unsurprisingly it went the distance as a stirring Dublin revival brought the teams level. Seán O’Shea, though, was ice cool at GAA headquarters kicking a gorgeous last gasp free from distance, guiding the Kingdom to a gleefully celebrated win.

Early on Derry were frustrating Galway in a tense All-Ireland SFC Semi-Final. Galway needed inspiration. That was most certainly provided by Damien Comer, who thundered into the match when Galway’s need was greatest. At the end Comer’s second goal following a breakaway move ensured Pádraic Joyce’s charges reached an All-Ireland decider for the first time in 21 years.

Derry’s revival under Rory Gallagher has been well documented. The 2022 Ulster Championship campaign culminated with Chrissy McKaigue hoisting the Anglo Celt Cup at St Tiernach’s Park in Clones. Passion and potential always accompany Derry, who will be eager to build on the solid foundation established.

The Tailteann Cup was one of the GAA success stories of 2022. A lively decider between Westmeath and Cavan unfolded at Croke Park with the midlanders eventually prevailing. It was a competition that featured several exciting matches in 2022 with Kevin Maguire captaining Jack Cooney’s charges to victory.

A chaotic encounter unfolded at Croke Park between Galway and Armagh. Eventually penalties were required to determine who would reach the penultimate stage of the All-Ireland SFC. Tight and tense Galway prevailed following a shootout.

Dominant in Down, Kilcoo had endured plenty of heartbreak on the Ulster and national stage during the past decade. So to finally earn a much coveted AIB All-Ireland Club SFC title brought real joy. Jerome Johnston supplied the decisive goal against Kilmacud Crokes.

It was an All-Ireland SFC Final laced with two remarkable forward displays. David Clifford was immense for Kerry, contributing eight points. At the opposite end of the field Shane Walsh mined nine for Galway, but it wasn’t enough to thwart the Kingdom. Brilliant scores throughout.

The debate lingers. Was Rory Grugan’s goal planted after nine or 10 seconds? Rian O’Neill’s drilled delivery caused panic, Grugan gathered, and made the Donegal net dance. It was a blistering start for Armagh, who enjoyed some productive moments in 2022.

The first penalty shootout in a senior inter-county match between Limerick and Clare at Cusack Park in Ennis gleaned attention. It ended in a win for Limerick, who subsequently reached the Munster SFC Final.