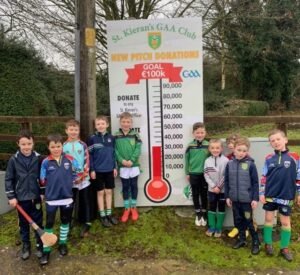 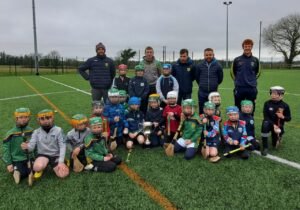 With temperatures starting to rise so too has St. Kieran’s GAA new pitch fundraising barometer. We have now reached €30,000. We would like to thank all those who have generously donated so far. All donations are greatly appreciated and will be acknowledged on a donation wall in the later stages of the project.

Our u9 hurlers stopped by our barometer on Sunday morning following their last training session of the year where they were joined by several special guests including members of our County Junior ‘A’ Hurling championship winning panel and the County Championship cup. This was a fantastic way for the lads to finish off their 2022 season and they are looking forward to 2023 with great enthusiasm.

The road hurling has become a great community event annually on Dec 27th and again this year everyone is welcome to come along on the day and walk the circuit even if you aren’t taking part in the road hurling. The event will start at 11am. Please bring an old sliotar (or two!!!) and please wear a high jacket.

Thanks to Richard & Michelle Collins & family Ardagh, who will be donating the proceeds of sale of a Belgian Blue in calf heifer, Gracie Blue, to this year’s road hurling fund. She will be auctioned at a special suckler sale at Newport mart on December 27th next.

The Collins family are donating the proceeds of Gracie Blues sale to St Kieran’s GAA clubs’ charity road hurling fund 2022, for Milford Care Centre and Our Lady’s hospital for sick children, Crumlin. The heifer’s sale and the road hurling take place on the same day.

The Collins family are donating the proceeds to Milford Care Centre in recognition of the care that the late Maura Collins received in Milford and at her home through the Palliative care team. It’s an extremely generous gesture by the family.

Our u21 footballers were the last club side to get their championship season underway this past Sunday when they made the journey to south Limerick to Kilmallock where Galbally were our opponents. Both sides met in the penultimate stage of the championship in 2021 in UL and on that occasion, it was the south limerick club who emerged victorious before losing out to Fr. Casey’s in the County Final. We went into Sunday’s game without the services of several first team regulars due to work, injury and holidays and it was always going to be a challenging test against a Galbally team that possessed the majority of their 2021 side. We got off to the worst possible start conceding two goals early on but to the lad’s credit they battled hard in the opening half and could count themselves very unlucky to go in at the interval trailing by four points, 2.4 to 1.3 having created a number of excellent scoring chances but unfortunately failed to capitalize on them. As the second half progressed Galbally’ s strength in numbers began to show as they began to punish our mistakes. At the final whistle while there was disappointment at the loss there were plenty of positives to take from the game into our round 2 encounter tonight against Mungret St. Pauls. Victory this evening will ensure qualification to the County Semi final in the coming weeks and with the return of several players and now having a competitive outing under our belts hopefully the lads can put in a strong performance and come away with the win. Tuesday’s game throws in at 8pm in Caherdavin (Na Piarsaigh GAA grounds)