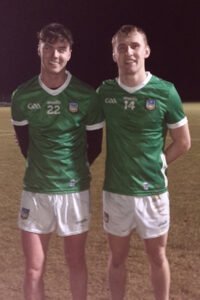 Well done to Killian Ryan and Brian Barry who both put in a great game on Wednesday 4 January when the Limerick Footballers took on Waterford in what turned out to be a one sided game. Both Killian and Brian got their names on the score sheet with Killian scoring one of Limericks four goals and setting up a second and Brian Barry got in a point from a tight angle. Well done to both who were well supported from Mungret St. Pauls on the night. We are also delighted to have John Hutton on the panel but who was unavailable for this game.

Meeting:
Members are invited to a Special Meeting of Mungret- St Pauls GAA on wed 18th Jan @8.30pm.
The agenda includes a motion to move from our own Club Trustees to a National Corporate Trustee in addition to updates on Club developments, and Training spaces for 2023. Its vital we have a large attendance at this meeting in order to adhere to requirements of GAA Constitution.

Every Steps Counts:
From 11th January – 15th February 2023 Irish Life are asking GAA clubs and community members to hit a 4,000km target (that’s roughly the distance around Ireland!) Mungret St. Pauls are pleased to announce that they are taking part in the challenge, Every Step counts. So get your fitbit charged and the Irish Life app downloaded.
If you have not done so and want a way to increase your steps during January why not join in the MyLife’s challenge in partnership with the GAA Community & Health department. This challenge is in support of GAA club and community members taking part in Ireland Lights Up 2023 also.
Mungret St. Pauls will be a starting point, if those that wish to take part would like to meet up at 7pm on Thursday 12 January.