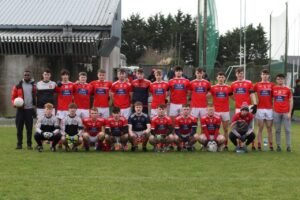 U21 Football:
Mungret St. Pauls 1-4 Fr. Caseys 2-14 The weather was a bit more favourable for this Premier U-21 Football Semi Final in Mick Neville Park on Wednesday 28 December 2022. There was a strong breeze which was to Fr. Caseys benefit for the first half with rain setting in just before half time it eased off during the second half. Mungret St. Pauls kept an achievable gap between themselves and Fr. Caseys, they had a great start to the second half but Fr. Caseys took over the game to go through to the Final. There was a minutes silence before the game started for a parent of one of our players. In the first few minutes both teams got their first scores in but it was Fr. Caseys that were more accurate as they went on to score another 5 points while Mungret St. Pauls had worked the ball up within scoring distance but were unable to execute any scores. A second free was pointed for Mungret St. Pauls and it was followed up within the next minute with an attack on goal being saved by the Fr. Caseys goalie only to land at one of our own players whos boot kicked it to the back of the net leaving it only to a one point game. Fr. Caseys added another two points before the half time whistle. Mungret St Pauls 1-2 Fr. Casey’s 0-8. Mungret St. Pauls started off the blocks strong scoring two points from play they were close to leveling the game but Fr. Caseys got their second wind and quenched our second half scores. The ball was with the Fr. Caseys forwards and our defence were working hard but the ball got loose and shot at the goals, while our goalie got his hand to the ball he was unable to get a strong hold on it and it saw its way to the back of the net boosting Fr. Caseys lead. Fr. Caseys did not stop there while again Mungret St. Pauls had a few chances it was Fr. Caseys that hit the targets and finished out the game in style. Well done to our players and management they were unlucky in their game but hopefully will come back stronger next year.
Every Steps Counts:
Mungret St. Pauls are pleased to announce that they are taking part in the Every Step counts in January. We will have more details coming up in the new year so get your runners ready, your fitbit charged and the Irish Life app downloaded.