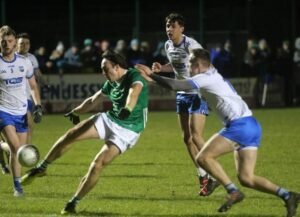 LIMERICK senior footballers got life under new manager Ray Dempsey off to an excellent start with a 4-14 to 0-9 victory over Waterford at Mick Neville Park in Rathkeale on Wednesday night.

Two goals in each half saw Limerick to a comfortable win with Cathal Downes hitting the net twice on his senior debut. Adrian Enright and Killian Ryan also raised green flags for a dominant home outfit.

Waterford were the better side early on and could have had three early goals but were denied by an excellent Aaron O’Sullivan save and a Dylan Guiry shot that crashed off the post.

Limerick eventually settled and opened the scoring on eight minutes when Enright fired into the roof of the net after Cian Sheehan capitalised on a Waterford defensive error.

Waterford fought back with the next three scores to level the game for the first time but Downes’s fisted effort to the net, after excellent work by Robbie Bourke, Gordon Brown and Barry Coleman.

Points from Cillian Fahy and Brian Fanning then followed to give Limerick a 2-2 to 0-3 advantage. Brian Lynch responded with a Waterford free with efforts from Caomhan Maguire and Donal Fitzgerald cutting Limerick’s lead to two.

However, efforts from Dara Noon, Sheehan and Fanning helped Limerick finish the half strongly and into a 2-5 to 0-7 lead at the break.

It was an utterly dominant display in the second half with Limerick keeping Waterford to just two points, scoring 2-9 themselves. Bourke got things underway with a long distance strike from play that was soon added to by Enright.

Enright then brought his total to 1-2, before Sheehan and Peter Nash added to Limerick’s total. Downes and Ryan added further goals late on to give Dempsey a winning start as Limerick Senior Football manager.