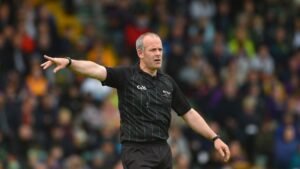 Congratulations to Johnny Murphy who has been appointed to referee Ballyhale Shamrocks v Cúchullains Dunloy.

The referees have been named for the AIB All-Ireland Club Senior Finals at Croke Park on January 22.

At 1.30pm in the hurling decider Limerick official Johnny Murphy will take charge of Ballyhale Shamrocks’ clash against Cúchullains Dunloy.

That match is followed by the meeting of Glen and Kilmacud Crokes in the Gaelic Football showpiece.

Tipperary’s Derek O’Mahoney will act as referee for the eagerly anticipated encounter involving the Ulster and Leinster champions.