One of the masterminds behind Limerick’s success is Shane Keegan’s latest guest on How To Win At Dominoes. 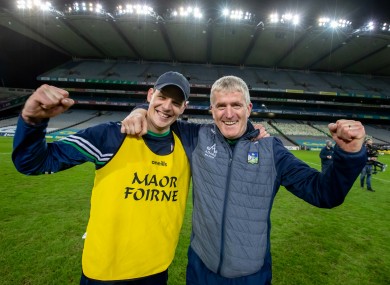 ONE OF THE MOST highly-rated coaches on the inter-county circuit joins Shane Keegan on the latest instalment of How To Win At Dominoes.

Paul Kinnerk, who helped mastermind Limerick’s 2018 and 2020 All-Ireland victories and was on the sideline for Clare’s Liam MacCarthy triumph in 2013, is the guest for the fourth episode of the second season of The42‘s coaching podcast.

He started out as a footballer with Limerick before embarking on a coaching career in hurling that saw the Monaleen clubman work under Davy Fitzgerald and John Kiely with great success.

Kinnerk had a major influence on the development of Limerick’s short-passing style of play that helped them become the dominant force in the hurling championship.

“It’s something I’ve always had a curiosity for, the tactical side of things,” he explains.

“For any sport I always enjoy looking at it and seeing why a play was successful, why it wasn’t. There’s great enjoyment to be gotten from that: sitting down with a group of people, developing a plan and implementing it and see if it’s successful. It’s a nice part of coaching.”

In a wide-ranging conversation, Keegan and Kinnerk discuss the benefits of game-based coaching, the time that goes into planning a training session and the dilemma of watching a game in the stands versus on the sideline.

“I’ve done both,” says Kinnerk. “With Clare I was up in the stand and had that detached position then feeding back down to management. Now with Limerick I’ve been down on the sideline.

“I’m probably more of a fan of the sideline, while there are obvious [benefits] to having that detached role in the stand, I think you’re able to read body language, communication levels, even the messaging aspect of it [on the sideline].

“Yes, once the players cross [the white line] they have the autonomy and I always believe they play it as they see it with little interference from us. There are points within a game where interventions are needed and it’s probably easier to get them when you are on the sideline.

“I’m more of a fan of that but there are advantages to going into the stand and detaching yourself from the intensity. If play is happening immediately in front of you it’s very difficult to detach yourself from that moment. There’s no doubt it at times I have to give myself a gentle reminder to calm down.

“Try to maintain levels of calmness and a systematic approach to observing the game for your feedback when needed and the decision you have to make have been collected in the right way.”