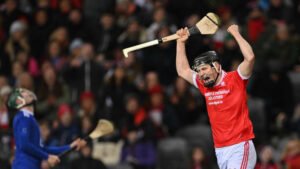 By Colm Gannon at Croke Park

Monaleen are heading home as All Ireland Intermediate Club Hurling Champions after a thrilling contest in Croke Park against Tooreen.

The Limerick men didn’t lead in the game until the 53rd minute of the contest, but when it counted at the end they finished strongly with Mark O’Dwyer and Donnacha Ó’Dálaigh leading them home.

The Mayo champions exploded out of the blocks early on and were 0-4 to 0-0 up inside 10 minutes through points from Shane Boland, Cathal Freeman, Liam Lavin and Seán Regan with Monaleen seeing four efforts go wide of the target, before Ed Doyle got their scoring going 11 minutes in.

Tooreen responded through a Shane Boland free and a second huge score from distance from Regan to push themselves five clear, before Luke Murphy got the Limerick sides second point of the day.

Andrew La Touche Cosgrave rose high to win the ball and crack it over the bar to leave just three between the teams and a minute later it was all square when Dan Power was left free inside the Tooreen penalty area and he made no mistake firing it low past Bobby Douglas to leave it all square at 0-6 to 1-3 with 20 minutes gone.

Eoin Delaney responded almost instantly with a fine score from play to put the Mayo side back into the lead as the game really began to heat up in the biting cold of Croke Park.

David Kenny stretched Tooreen’s lead to two with a well hit score from under the Cusack Stand side of the field, but the lead was cut back to one seconds later when Mark O’Dwyer pointed a long range free and it was wiped out not long after when the same man pointed after a smart sideline move.

Tooreen weren’t going away and the next score was the second goal of the day, Bobby Douglas lanced a free down the field the ball was worked to Eoin Delaney and onto Liam Lavin who drove the ball to the back of the net to put his side three clear. Shane Boland added one from play in the seconds after and Ray Larkin’s men were four clear with time almost up in the half.

Mark O’Dwyer cut the gap back to three with a free just as injury time slipped into play and La Touche Cosgrave cut it back to just two with the final play at the end of an exhilarating half of hurling.

Tooreen drew first blood in the second half with Delaney getting a point seconds after the restart and then Shane Boland tagging on a free to have his side four clear early doors. Donnacha Ó’Dálaigh cut it back to three points and then on 40 minutes O’Dwyer added a point from a free to leave two in it.

Fergal Boland got his first point of the night to push his side three to the good again after a slaloming run through the middle of the field.

Ó’Dálaigh kept his side right in touch with a fine score, sweeping the ball over the bar under pressure from the Cusack Stand side of the field. O’Dwyer showed his class in 45 minutes, ghosting across the 21m line to collect the ball and slot it over on the turn to leave just one it it.

The same man had a great chance to get his side’s second goal of the day when Luke Murphy spotted him behind the cover but his effort flew across the face of the goal from close range.

Cathal Freeman put two between the teams again with a long range score – but Monaleen weren’t going to go away that easily.

O’Dwyer hit two on the spin, the first from a fee and the second a huge effort from distance to level it up at 1-13 each and then Ó’Dálaigh put the Limerick men in front for the first time in the evening with seven minutes left on the clock.

Freeman levelled it up once more two minutes later, but it was the Munster men who were finishing strongest. Ó’Dálaigh again put his side in front on 55 minutes and Joseph Fitzgerald pushed them two clear not long after.

Fergal Boland brought it back to a point game as time ticked down, Tooreen tried to get the leveller butstout defending from Monaleen held them out and the final say on the day was left to Ó’Dálaigh who swept over the final score of the day from under the Hogan Stand.