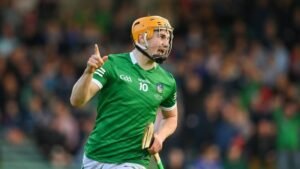 Fast, skilful, and a lethal finisher, Shane Meehan is a top-quality inside forward who looks set to star for Clare for years to come. He really caught the eye in last year’s National League scoring 2-4 from play in five matches, but his championship campaign was curtailed by hamstring and wrist injuries. If he can remain fit, he’ll be a big player for Clare in 2023.

Bryan O’Mara is the player many people think Tipperary will build their defence around in the coming years. A powerfully built athlete as well as a fine hurler, he has all the attributes you need as a centre-back in the modern game. He burst onto the scene during the 2021 Allianz League but then a broken wrist ruled him out of the Championship. Earlier this year he captained UL to the Fitzgibbon Cup title but then opted to go to the USA for the summer rather than play senior inter-county hurling. He’s back in the fold now though which is a major boost for the Premier County.

Cianan Fahy brought something different to the Galway attack this year. A strapping athlete, his ability to win hard ball and use it wisely created lots of opportunities for his fellow forwards. He’s a real work-horse of a player who leads the Galway press when they don’t have the ball. He still has a few rough edges and needs to bring more scores to his game, but you get the feeling he’ll get better and better and be a big player for Galway for years to come.

Billy Drennan was the best U-20 hurler in Ireland in 2022. He was the key man for Kilkenny when they defeated Limerick in the All-Ireland Final, scoring nine points of their 0-19 total, five of which came from play. A quick, skilful, and accurate inside-forward, he also has great vision and reactions which might have something to do with the fact that he’s also an outstanding handballer. Expect him to get an extended run in the Alllianz League with Kilkenny next year.

Adam English was arguably Limerick’s best player in the U-20 grade for the last two years and made his senior debut in the Allianz Hurling League this year. A very mobile and skilful half-forward with the power to burst through opposition defences, he’s also a very clinical finisher. Breaking into the Limerick half-forward line won’t be easy, but John Kiely is likely to give him more opportunities to prove his worth in next year’s League.