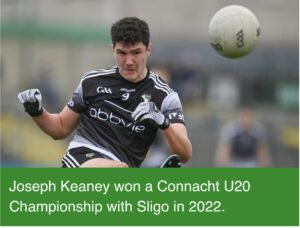 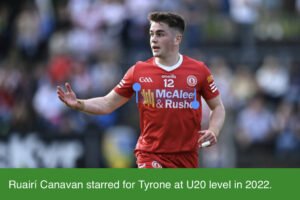 A surname synonymous with Tyrone’s greatest footballing days, Ruairí Canavan is a serious prospect.
Canavan’s delightful score for Errigal Ciarán against Glen was the latest reminder of his considerable skill.
Tyrone’s All-Ireland U20 campaign featured a 1-7 haul in the final against Kildare, following an eight point contribution in the triumph over Kerry.

Joseph Keaney (Sligo)
A star in Sligo’s Connacht U20 win in 2022, Joseph Keaney has the potential to make further progress.
The St Molaise Gaels clubman is in ATU Sligo’s Sigerson Cup panel and that is another platform to showcase his craft.
With Tony McEntee in charge Sligo have enjoyed some promising moments recently with a number of players eager to make a mark at the highest level.

Ethan Doherty (Derry)
It has been a remarkable spell for Ethan Doherty, who continues to impress for club and county.
Nominated for the 2022 PwC GAA-GPA Young Footballer of the Year award, Doherty was a key figure in Derry’s Ulster SFC triumph.
The upcoming AIB All-Ireland Club SFC semi-final for Glen provides Doherty was another opportunity to demonstrate his ability on the Croke Park stage.

Cormac Egan (Offaly)
Injuries have disturbed Cormac Egan’s progress, but the Tullamore clubman could make a real impact with Offaly in 2023.
With the Sigerson Cup commencing in January, Egan, an All-Ireland U20 winner in 2021, will be part of the UCD panel.
New Offaly manager Liam Kearns has repeatedly shown a willingness to integrate emerging talent into senior panels so Egan will be worth monitoring in the months ahead.