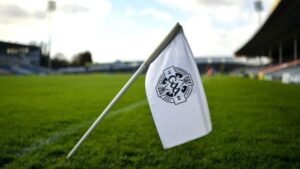 Congratulations:
To Limerick Senior Footballers management team led by Ray Dempsey and well done especially to our club Players Cillian Fahy (0-2) and Jack Ryan, James Molyneaux, Limerick drew with Tipperary on a scoreline of 2-13 to 1-10, Cillian and Jack played the whole game on the night and James was listed on the subs but was not used on the night and there next game is against Cork in the Final, on tomorrow Friday January 20th, in Mallow, at 7.30pm (with extra-time if necessary), Referee to be announced, please Support the Limerick Senior Management team led by Ray Dempsey and especially our club players Cillian, Jack and James.

Dromcollogher/ Broadford GAA Club Lotto Draw:
The following are the Results of the Lotto Draw that took place on the 16-01-23, and the numbers were: 6, 12, 21, 28 There was no winner of Jackpot at €10,100, and there was three winners of match three at €105 and they each got €35 and they were: Helen Linehan, Darren Ahern, Séamus Barry and the two lucky dips at €50 each were: Lauren and Jenna Fitzgerald and Ger (Pops) Noonan, Dromcollogher and the next draw took place on Monday night 23-01-2023, in the GAA Field, Dromcollogher and the Jackpot is going up to €10,200 and the Match Three will be staying at €100.
Lotto tickets are available in local shops in the area where the boxes are provided and available for sale in the local square on Friday and Saturday mornings from 9am to 1pm or online by following the link below: https://play.clubforce.com/play_newa.asp?ll_id=2076&fbclid=IwAR3KJ9x58dsVg7yQZbzTaodJ0KAYP7aGTPmLEfXxzrKOnzFYmH7FrHLZRSY#Anchor.

Fixtures:
McGrath Cup Final VS Cork, on this coming Friday January 20th, in Mallow, at 7, .30pm, with extra-time with necessary, referee to be announced and the best of luck to the management team of Limerick Senior Footballers led by Ray Dempsey and especially to our club players Cillian Fahy, Jack Ryan and James Molyneaux.