Cork prove too strong for Limerick in McGrath Cup Final:

Cork prove too strong for Limerick in McGrath Cup Final: 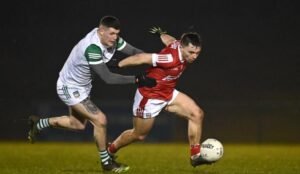 Cork have beaten Limerick in the McGrath Cup Final one a 0-19 to 2-7 scoreline in Mallow. It was a deserved win for Cork as they kept Limerick to just 1-3 from play in the contest.

Limerick gave themselves avenue into the game with Cork leading comfortably with goals in either half from Iain Corbett and Davy Lyons but the shooting power of Brian Hurley and Stephen Sherlock proved too be too much.

Cork opened the scoring in the fourth minute through a Sherlock free that was soon followed up by the first from play courtesy of Brian O’Driscoll.

Further points from Sherlock, Chris Og Jones and Hurley then saw Cork five to the good before Limerick got on the board courtesy of a Cian Sheehan free.

A sublime Hurley mark from all of 50 metres restored Cork’s lead but Limerick were soon back in the game. A patient build up eventually saw Corbett put a dangerous ball across the edge of the square.

Jack Ryan had made his may up to join the attack and looked set to palm the ball into the net but was impeded by O’Driscoll and referee Brian Fleming awarded the penalty that Corbett dispatched into the left corner.

The Limerick captain then followed with a gorgeous sliced effort from 45 metres to leave the score at 0-6 to 1-2 in Cork’s favour after 24 minutes.

That lead was increased to three soon after the restart with Hurley kick two in quick succession. A Sheehan free then brought that advantage to two with four gone in the second half.

Cork found their form again in the opening quarter to the second half with Sherlock landing four frees in a row to stretch their advantage to six points. That was soon up to seven with Hurley landing his fourth from play.

Sheehan stemmed the tide for Limerick and then Davy Lyons fired in their second goal from close range after his initial shot and Adrian Enright’s effort was blocked. That left two in it once more after 55 minutes. However, Cork finished the stronger with Hurley to the fore and earned a deserved victory.