All-Ireland Intermediate and Junior Club Finals to be broadcast live on TG4:

All-Ireland Intermediate and Junior Club Finals to be broadcast live on TG4: 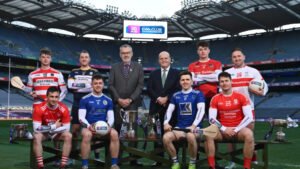 Eight teams from all across Ireland will travel to Croke Park this weekend to compete in the Junior and Intermediate AIB GAA All-Ireland Football and Hurling Club Championship Finals, with all four matches across Saturday and Sunday to be broadcast live on TG4.

What promises to be an epic weekend of action in both codes begins with a feast of hurling from 5pm on Saturday, January 14th, when Munster champions, Ballygiblin (Cork) take on Easkey (Sligo) in the AIB GAA Hurling All-Ireland Junior Club Championship Final. The Intermediate showpiece follows at 7pm, with Monaleen of Limerick up against Mayo outfit, Tooreen.

Football fans will also be travelling to GAA HQ in their droves for an exhilarating day of action on Sunday, January 15th. The Junior decider throws in at 1.30pm with Kerry and Munster champions Fossa against Ulster and Tyrone representatives Stewartstown Harps. The AIB GAA Football All-Ireland Intermediate Club Championship Final follows at 3.30pm, where Galbally Pearses (Tyrone) play Rathmore (Kerry).

The AIB GAA All-Ireland Club Championships feature some of #TheToughest players from communities all across Ireland. Now in its 32nd year supporting the GAA Club Championships, AIB is proud to once again celebrate the communities that play such a vital role in sustaining our national games. From players to coaches, volunteers to referees, to the passionate fans who will travel in their thousands to Croke Park this weekend, AIB thanks all those whose work often goes unseen.

Cathail O’Mahony will play a central role for Ballygiblin as they make their return to Croke Park this weekend, having made last year’s Junior hurling final. Following an impressive provincial campaign, and a solid showing in their semi-final win over Horeswood of Wexford, the Cork men will be intent on going one better this time around. In their way, however, stands Easkey of Sligo, who will look to the leadership of county man James Weir. The men from the Yeats County will take plenty of encouragement from their high-scoring win over London side, Kilburn Gaels in the semi-final and will be hoping to cap a memorable season, which saw them win the club’s first-ever provincial hurling title.

In the Intermediate hurling decider meanwhile, Fergal Boland is a man used to the big occasion and Tooreen will need all of his experience to come away with a win in the Mayo men’s first All-Ireland Final. A brave 1-18 to 1-14 win over Down team, Liatroim Fontenoys, will give Boland and co. belief that they can go all the way. Monaleen, however, will provide stern opposition and, with Limerick’s Andrew La Touche Cosgrave in their ranks, they will certainly fancy their chances. Fighting spirit was needed in their semi-final win as they edged Bray Emmets (Wicklow) by five points with the help of two late goals. A historic season, which saw Monaleen become the first Limerick club to win the AIB Munster GAA Hurling Intermediate Club Championship, will reach a fascinating conclusion on Saturday evening.

There will be interest from across the country in the outcome of the AIB GAA Football All-Ireland Junior Club Championship Final, as Kerry star, David Clifford hopes to add to his All-Ireland success with county with his club Fossa this weekend. While Clifford’s scoring prowess will be key, the influence of Matt Rennie in the centre of the park will also be crucial – and he will be hoping for a repeat of his performance in midfield in their 12-point semi-final win over Meath side, Castletown. Stewartstown Harps meanwhile come into the game off the back of a second Ulster GAA Football Junior Club championship title, where they defeated Drumlane of Cavan in a heart-stopping thriller. They were in impressive form in their 1-14 to 1-9 victory over Clifden of Galway in the All-Ireland semi-final, and will look to the firepower of Gareth Devlin at full forward to get them over the line this weekend.

The AIB GAA Football All-Ireland Intermediate Club Championship Final also throws up a Kerry-Tyrone pairing. Kerry representatives Rathmore have been as impressive as they have been efficient on their route to Croker – beating Na Piarsaigh (Limerick) by 10 points in the provincial final before a 2-16 to 1-10 win over Wexford side, St Mogue’s Fethard. The East Kerry outfit will draw encouragement from the experience of Kingdom campaigner, Paul Murphy, who is well used to final day in Croke Park. Tyrone and Ulster champions Galbally Pearses however will be keen to upset the odds, and county man Liam Rafferty will add experience and resilience to the Ulster men’s defence which will no doubt be tested this weekend. They will not lack the firepower however, having put four goals past Dunmore MacHales of Galway in the previous match.

In advance of this weekend’s finals, AIB Chief Executive, Colin Hunt said: “The concluding weekend of the AIB GAA All-Ireland Intermediate and Junior Club Championships across football and hurling is a showcase for the incredible athleticism and skill at all levels of our national games. As always, we will see the passionate support that fans display for their clubs and communities this weekend. We wish all those involved in the four finals this weekend the very best of luck.”

Uachtarán Chumann Lúthchleas Gael, Larry McCarthy stated: “I would like to welcome the players, coaches, members and supporters of all eight clubs involved in this weekend’s finals to Croke Park. For those playing, the opportunity to represent your communities on the national stage today is an incredible honour. Regardless of the results, in reaching this stage alone you have made each of your clubs and communities incredibly proud. Enjoy the matches.”