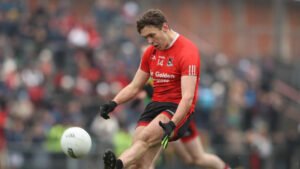 St Mogue’s Fethard (Wexford) v Rathmore (Kerry), Páirc Uí Rinn, 2pm (Live stream)
Ref: James Molloy (Galway)
Kerry and Munster champions Rathmore go into this match as warm favourites, but St. Mogue’s Fethard of Wexford have already proven they’re underdogs with a bite.
Few tipped them to beat Meath champions Dunshaughlin, relegated from the senior grade last year, in the Leinster Final, but they produced a fantastic performance one the day to run out 1-15 to 2-11 victors.
The Wexford side have a strong spine in full-back Daniel Mullan, centre-back Garrett Foley, Joe Sutton and Richie Waters at midfield, John Tubritt at centre-forward and county hurler Mikie Dwyer at full-forward.
Teenager attacker Morgen Ellis is another player of rich potential as he showed with a crucial goal in that Leinster Final.
History has taught us though that Kerry clubs generally do very well in this competition, topping the roll of honour with six All-Irelands, and Rathmore have looked very good en route to this match.
They edged out a highly rated An Ghaeltacht side in the Kerry Final and then enjoyed comfortable wins over Kanturk and Na Piarsaigh in Munster.
Kerry star Paul Murphy missed the Munster Final because he was on honeymoon, but is back in harness for this match and a real lynchpin of their defence.
If he and the Ryan brothers, Mark and Cathal, can dominate the middle third, then forwards like John Moynihan, Shane Ryan, and Chrissy Spiers will be hard to stop.

Tyrone have a good history of producing competitive teams in this grade and Galbally Pearses certainly live up to that tradition.
They came through a ferocious Tyrone campaign, defeating fancied teams like Edendork, Killeshilll, and Pomeroy, before their assault on Ulster.
They won that provincial title very impressively, hammering Glenullin in the quarter-final before carving out convincing wins over Dungloe and Corduff.
They’re managed by the very experienced Paddy Crozier who is assisted by former Tyrone star Joe McMahon, so it’s no surprised they’re a well-drilled, tactically astute team.
Defensively solid, pragmatic in possession, and able to attack effectively in numbers, they play a brand of football that we’ve come to associate with Tyrone teams in recent times.
They’ll go into this match as favourites, but Galway and Connacht champions Dunmore McHales are a very decent outfit themselves.
A club with great tradition, they’ll very much feel like they belong on this stage and come into this match with a lot of momentum after a hard-fought Connacht campaign.
They showed a lot of character as well as ability to overcome strong Ballyhaunis and St. Dominic’s, and play a nice brand of attacking football where everyone contributes.
Reflective of this is the fact that nine of their players got on the scoresheet in the Connacht Final win over St. Dominic’s.
Both teams have a lot of quality, so this game has the ingredients to be a cracker.

Spearheaded by the Clifford brothers David and Paudie, Kerry and Munster champions Fossa are red-hot favourites coming into this match.
They swatted aside Castlemahon and Kilmurry with ease in Munster, racking up a combined tally of 2-39 in those two matches with the Cliffords leading the scoring charge.
Kerry clubs have dominated this competition since its inception, winning 10 of the 20 All-Irelands contested, and Fossa are as good if not better than the previous teams from the Kingdom to make it this far.
Aside from the two Cliffords, they have other very talented players in the likes of the O’Shea brothers, Emmett and Tadhg, Fintan Coffey, and Paddy Sheehan.
As for Castletown, they’re a nicely balanced team, with wing-back Killian Price particularly impressive en route to this Final.
If they are to pull off a shock they’ll need Shane Hoey and Rian McConnell to give them a platform in midfield and forwards like Kevin Ross, Damien Ginnity, and Declan Cribbin to have the game of their lives.

An irresistible force meets an immovable object in this fascinating All-Ireland semi-final.
Tyrone and Ulster champions Stewartstown have banged in seven goals in their last four games whereas Clifden haven’t conceded any in three.
Both teams looked impressive in their provincial campaigns, with Stewartstown in particular setting a hot pace in their quarter-final and semi-final wins over Teconnaught and Letterkenny Gaels which they won by a combined total of 31 points.
Things were much tougher in the Final itself against a fine Drumlane team, but the manner in which Stewartstown won that match after a penalty shoot-out said a lot about their character.
They trailed for most of the game before a late Ryan Connolly free ensured extra-time, and then had the mental fortitude to come through the shoot-out.
One of their best players, Gareth Devlin, went off with a hamstring injury in that match and is a doubt for Saturday, but a Stewartstown team that hasn’t lost a match all year in League or Championship will still be confident even if they have to do without him.
As for Clifden, they’ve shown great form too, coming through tough battles against Carrigallen and Islandeady in Connacht before a convincing provincial final win over St. Ronan’s.
They’re a classy team who play a nice brand of football that places an emphasis on getting quick ball into their dangerous full-forward line of John O’Brien, Emmet Moran, and Enda Conneely.
All signs point to what should be an epic showdown between two very well-drilled teams.